It seems like spring has made several attempts to gain the upper hand in the last weeks, but it’s still cold enough in the mornings to wear wool! The new semester is only two weeks away and I am neck-deep in preparations for my classes.

Fortunately, there has been enough time for other things like reading, knitting and spinning (and busting my overall budget with fibre and books purchases). 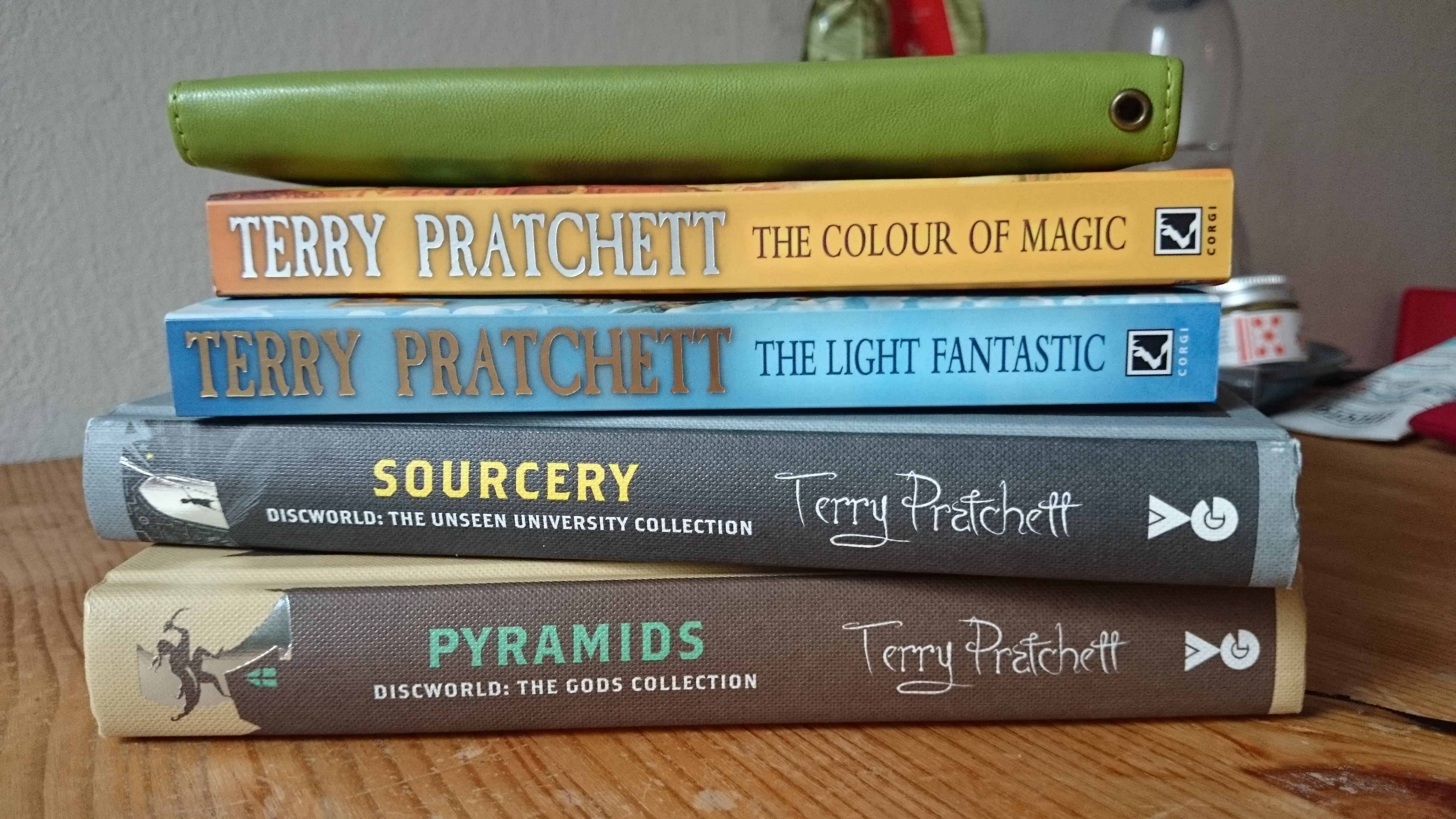 A few weeks ago I stumbled upon a new event on Ravelry that has since then occupied most of my free time – the MegaSAL (link to Ravelry group). This Spin-along / book club brings several hand-dyers together in designing colourways based on the late Terry Pratchett’s Discworld novels and the participants in reading the novels and spinning up said Fibre from april to the end of June. Although I had heard about him I hadn’t read a single book by Terry Pratchett before (don’t ask me why – I don’t know!) but since I joined the group I have devoured the first seven books in the series and have fallen in love with Ankh-Morpork, Rincewind and the Luggage, the Witches and Death and I’m very glad there are another 37 books to read, with a last novel being published sometime this year. Sadly, Terry Pratchett passed away little over two weeks ago but I am grateful he left such a legacy of wonderful, satirical and funny stories.
To prepare for the SAL I have nearly managed to clear my bobbins and I have scored a lot of lovely fibre which is now slowly making its way through customs and the post to my wheel. That means I have lots of finished yarn and a bit of knitting to show you!

Ages ago my obsession with Fair Isle knitting made me attempt to divide some lovely hand-dyed Shetland by Southern Cross Fibers into its different colours and spin it up for a colour work project. 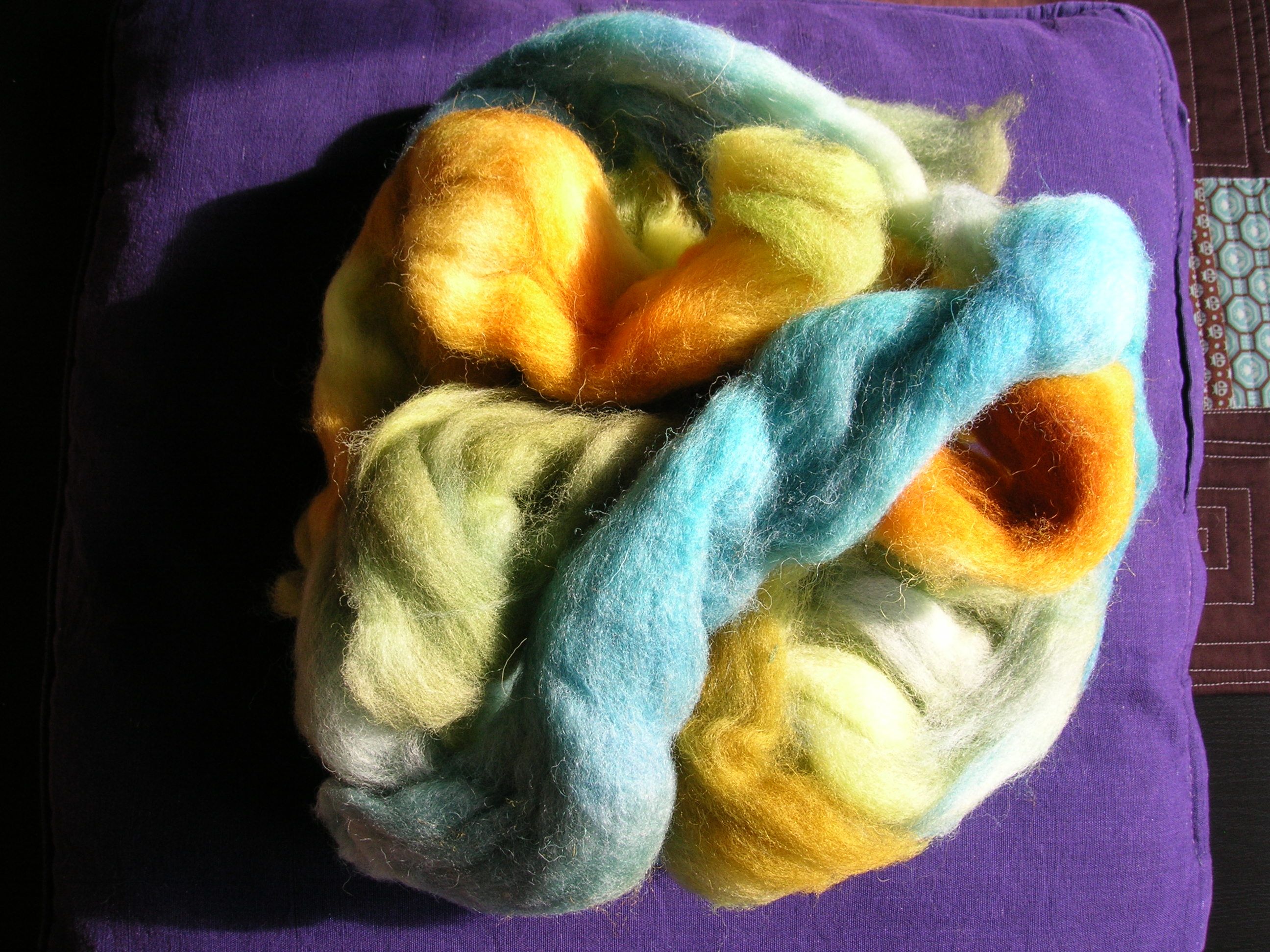 Separating the colours proved difficult so the result is not ideal but combined with a neutral colour I think it will be fine. 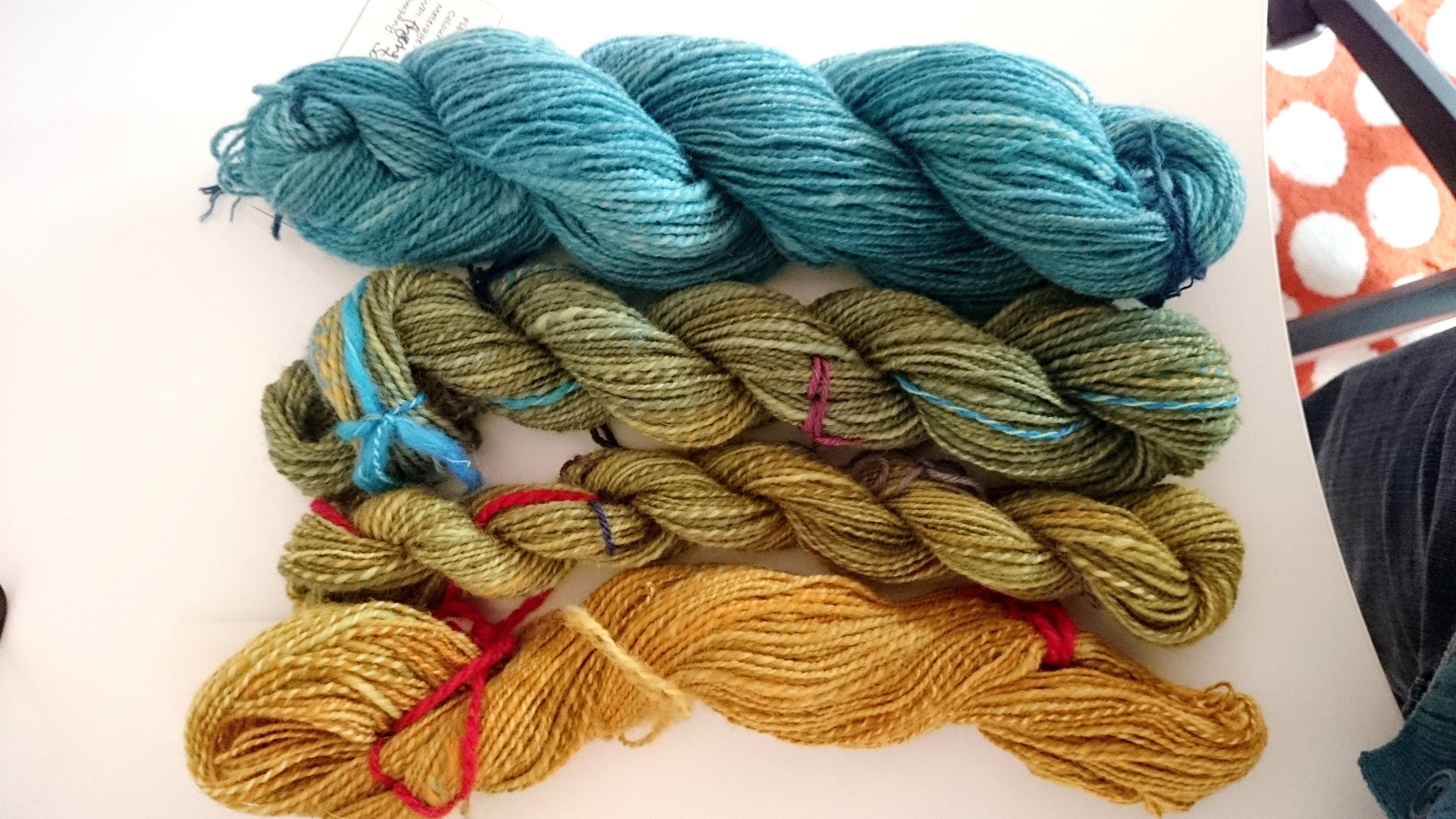 2. Getting back my spinning mojo

Since I spent very little time at my wheel I felt I needed to get back into the rhythm before the Spin Along. I grabbed random braids out of my overflowing stash and got to work: 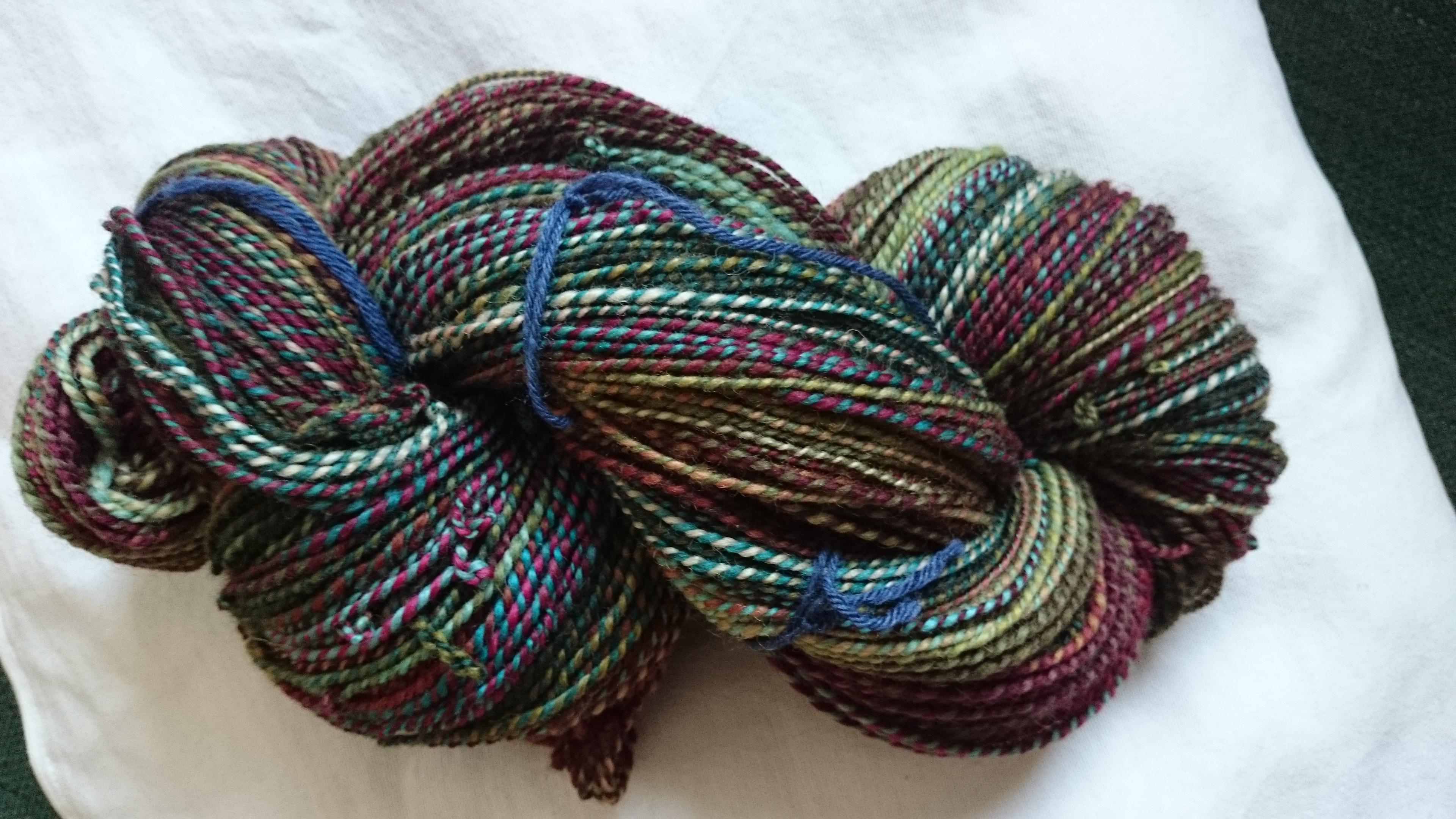 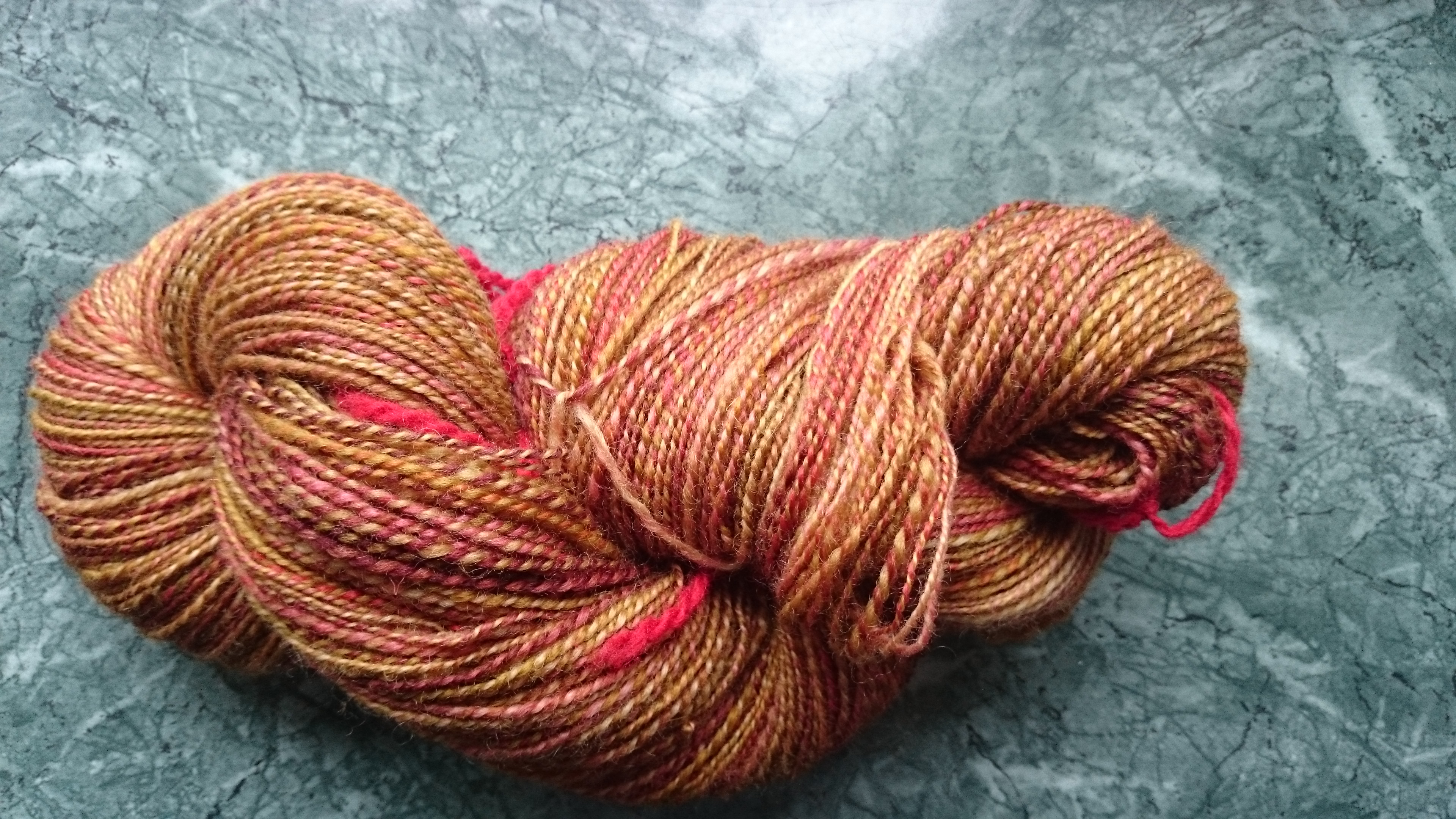 I have another SCF braid on the wheel at the moment and there is some knitting getting done as well (sorry about the picture, I can’t get it to rotate the right way): 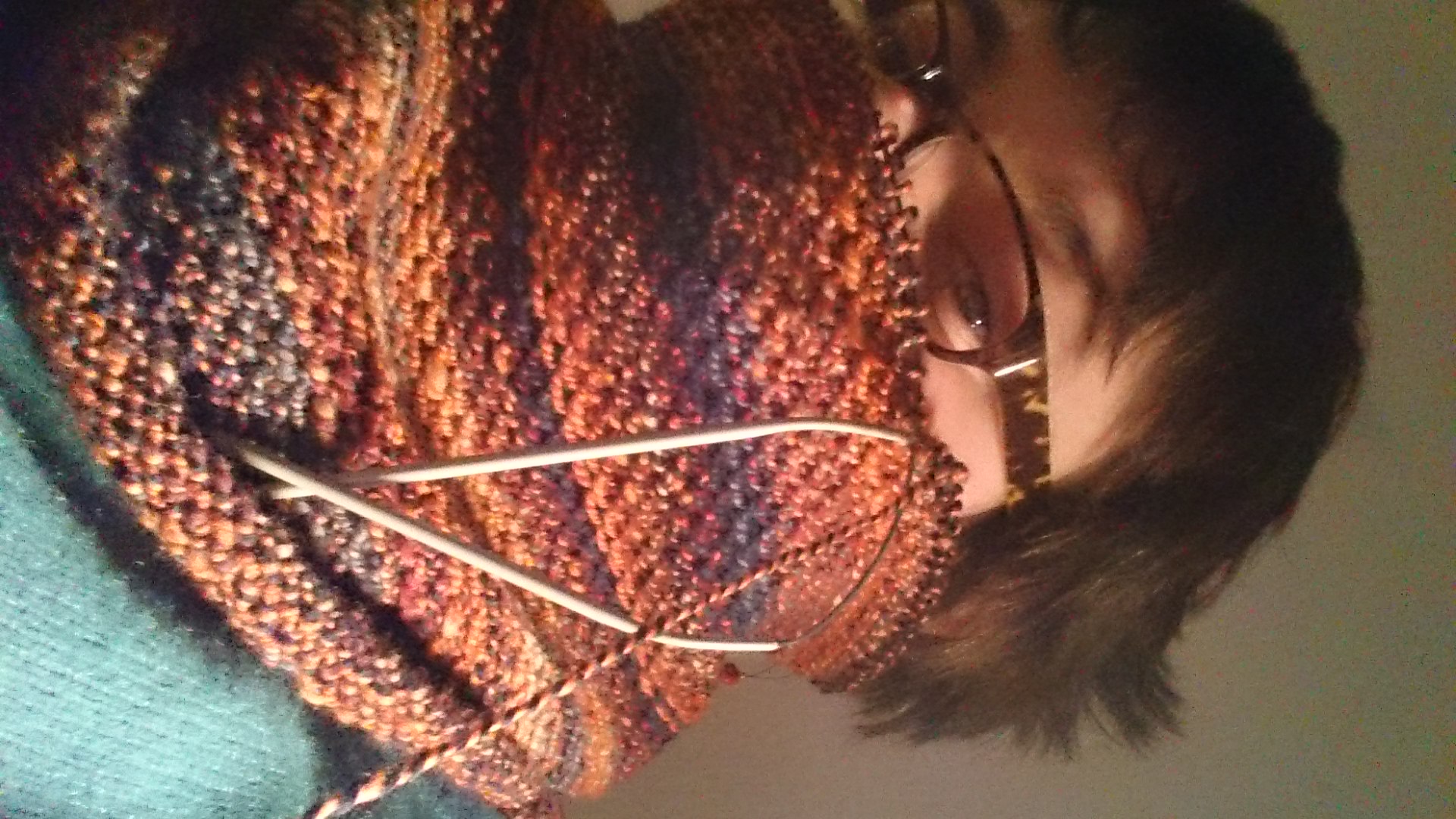 It’s another Honey Cowl (and another obsession), this time in Southern Cross “Dark Wing”.
I always have to think about “Darkwing Duck”, a cartoon my little sister used to watch and which is a perfect transition to a recent arrival to our garden pond: 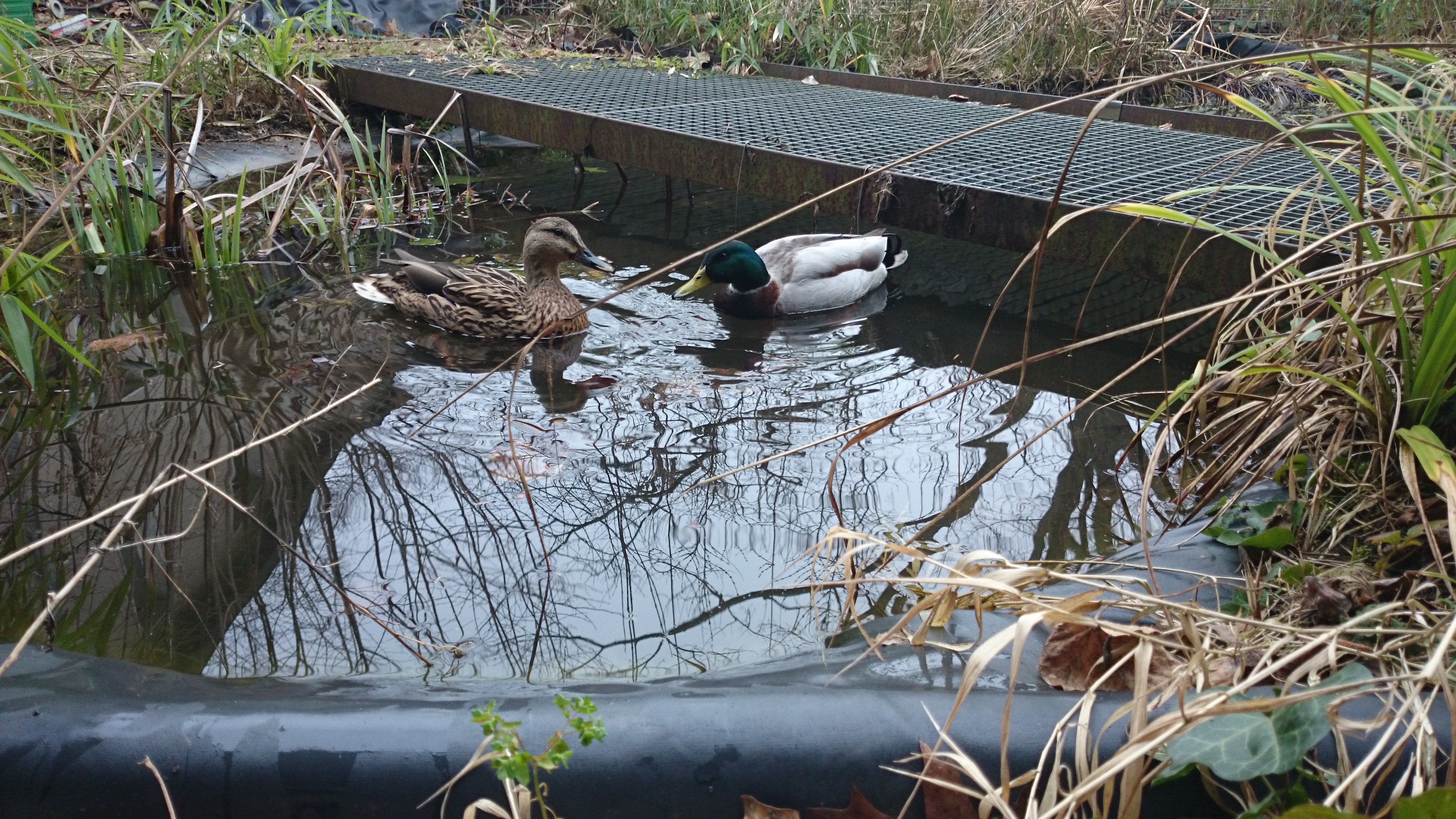 So, I’ll be back on April Fool’s Day with tales of our marvellous Spin-Along kick-off with cider :-)! It will be quantum*!

This year I feel as if I spent most of winter in a state of hibernation and am just now waking up. About time! It’s slowly getting warmer and there are snowdrops and crocuses everywhere. This waking up is happening in different parts of my life and this year looks like it will bring lots of new opportunities and adventures. After finishing and defending my dissertation last year and the problems I had to face concerning the publication of my work I finally feel ready to let it go and move on!

This space has been in hibernation for a lot longer and I’m still not sure if I want to start blogging again. I’m a bit tired of writing one or two posts, disappearing for months and then come back once again. Writing my PhD has disrupted my life on every level and it’s been hard to be just me again and not me, writing a 450 pages tome Monday to Saturday with a one hour lunch break and the occasional free evening thrown in. I’m glad I did it but I find myself facing the fact that I probably won’t make a straightforward career in academics and I’m not sure I really want to. So, it’s not clear where I’m going and what I’m going to do but I think this year will be one of experimentation and trying new things, things I always thought I wouldn’t be able to do like doing a BA in computer science (mediocre math skills), traveling on my own where I want (too unconfident and wary of flying) and hiking (too unathletic). So expect to read about a wild mixture of things here (if anyone is even still reading this ??)!

For now, I’d like to show off some tiny signs of a reawakening in my spinning and knitting which I also nearly put on hold during the last year.

I’ve cast on for a Hansel half hap shawl using the pattern by Gudrun Johnston and Jamieson and Smith 2 ply Jumper weight. The colour combination has given me a headache and I’m still not totally satisfied. Might have to substitute the turquoise. 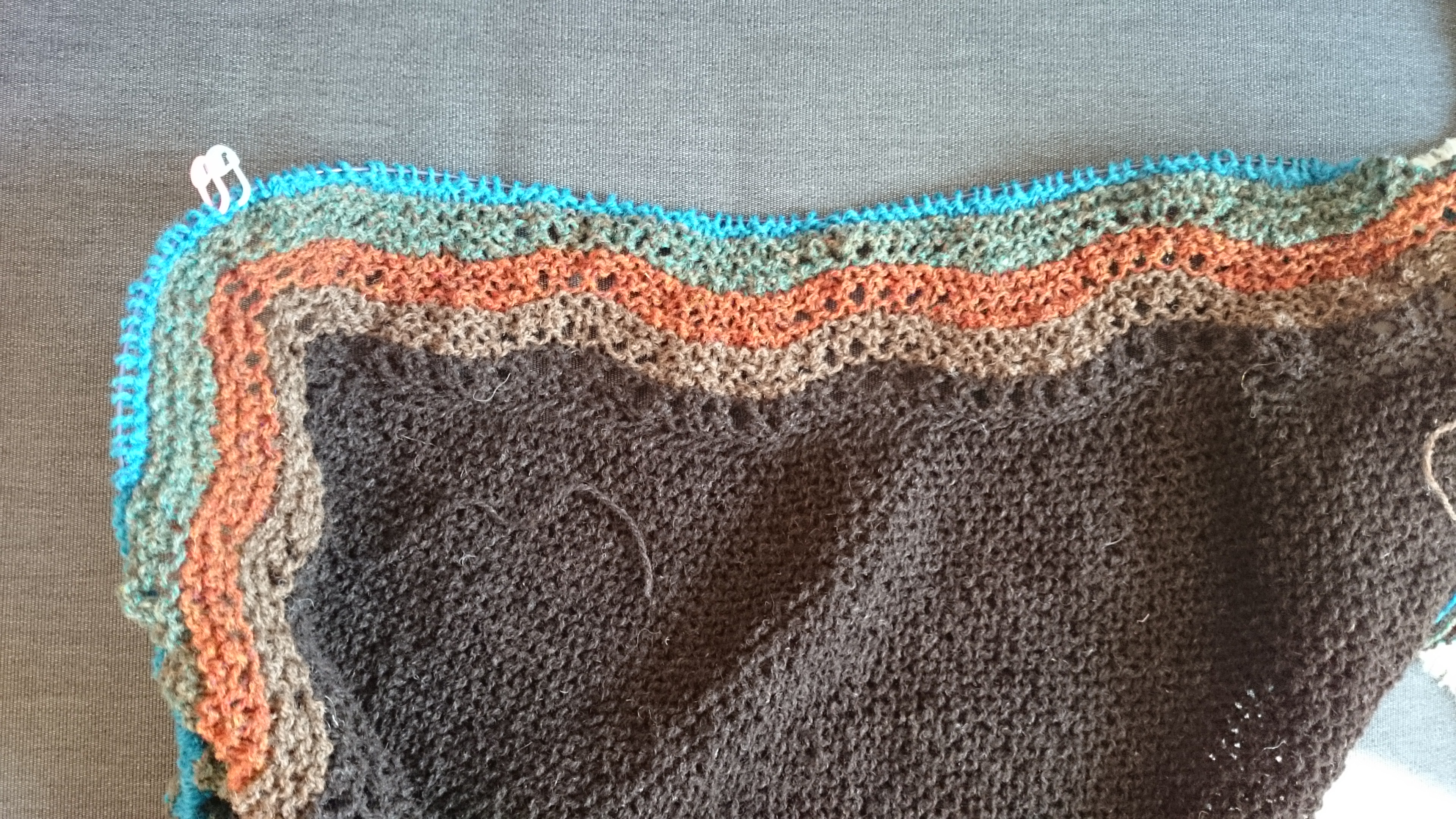 Since the shawl is on hold due to colour contemplation I cast on for a simple cowl with my handspun. Another thing that will happen this year – knitting with the mountain of handspun I have amassed in the last years!

So, this is the Honey cowl (ravelled here) by Antonia Shankland: 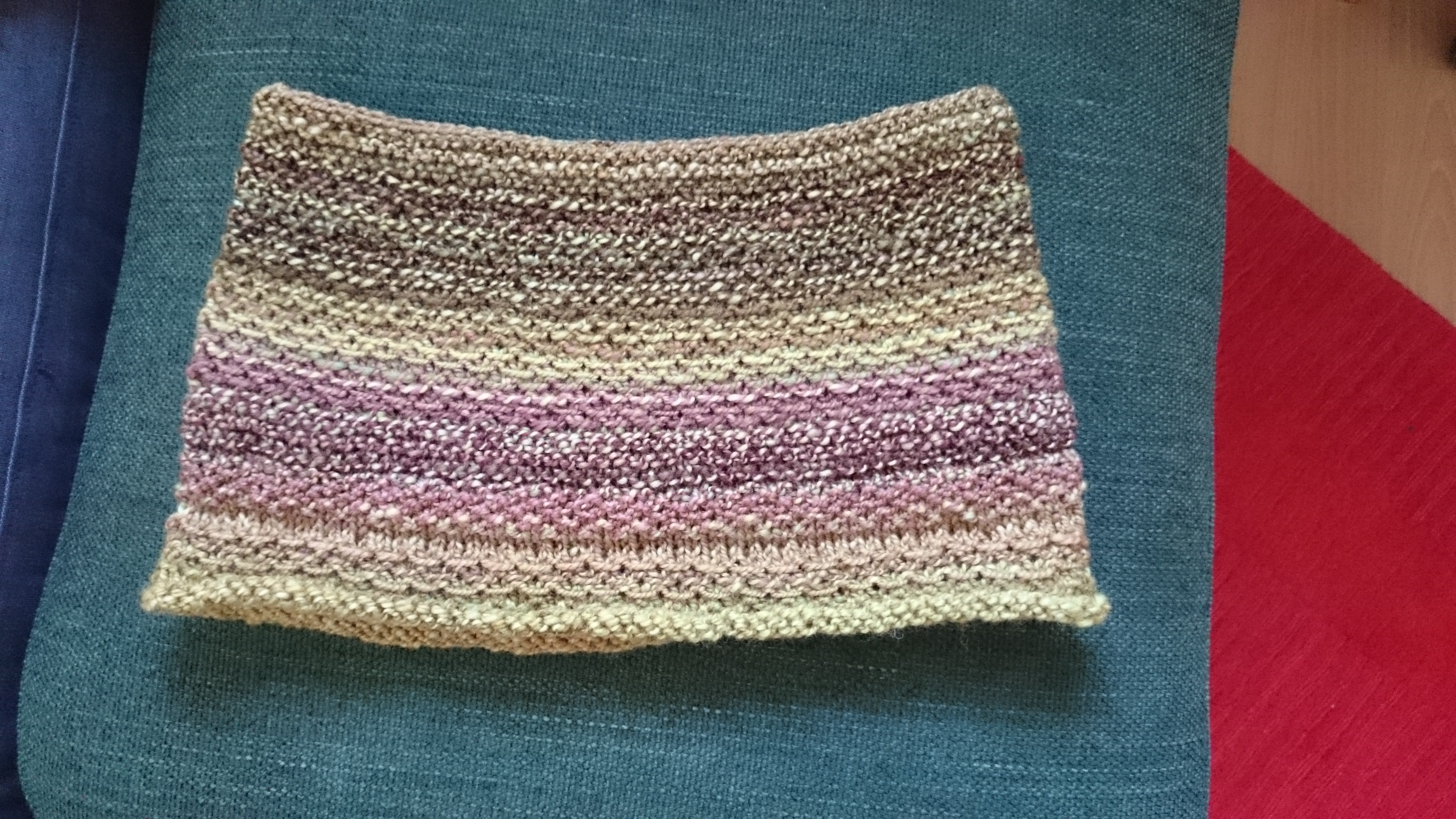 I love that it almost stands upright on its own! 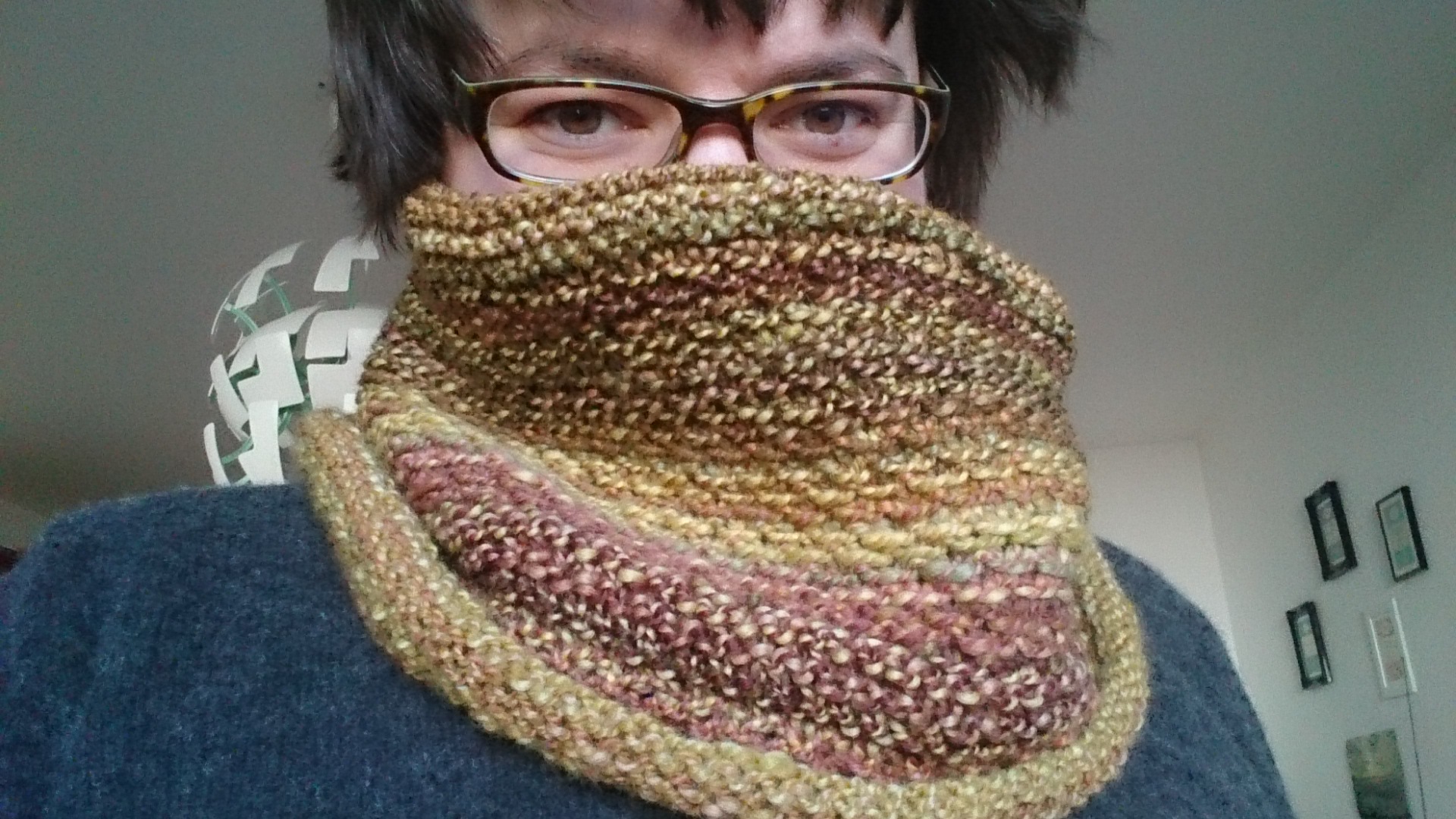 Last weekend I finally made it back to my wheel and there is a spinning group meeting coming up next week I hope will boost my motivation to reduce my fibre stash! To get going again after so long I started with some old BFL from the now sadly closed Crown Mountain Farm Fibres. After years stuffed into one of my stash boxes it is still soft and the perfect colour for waking up: 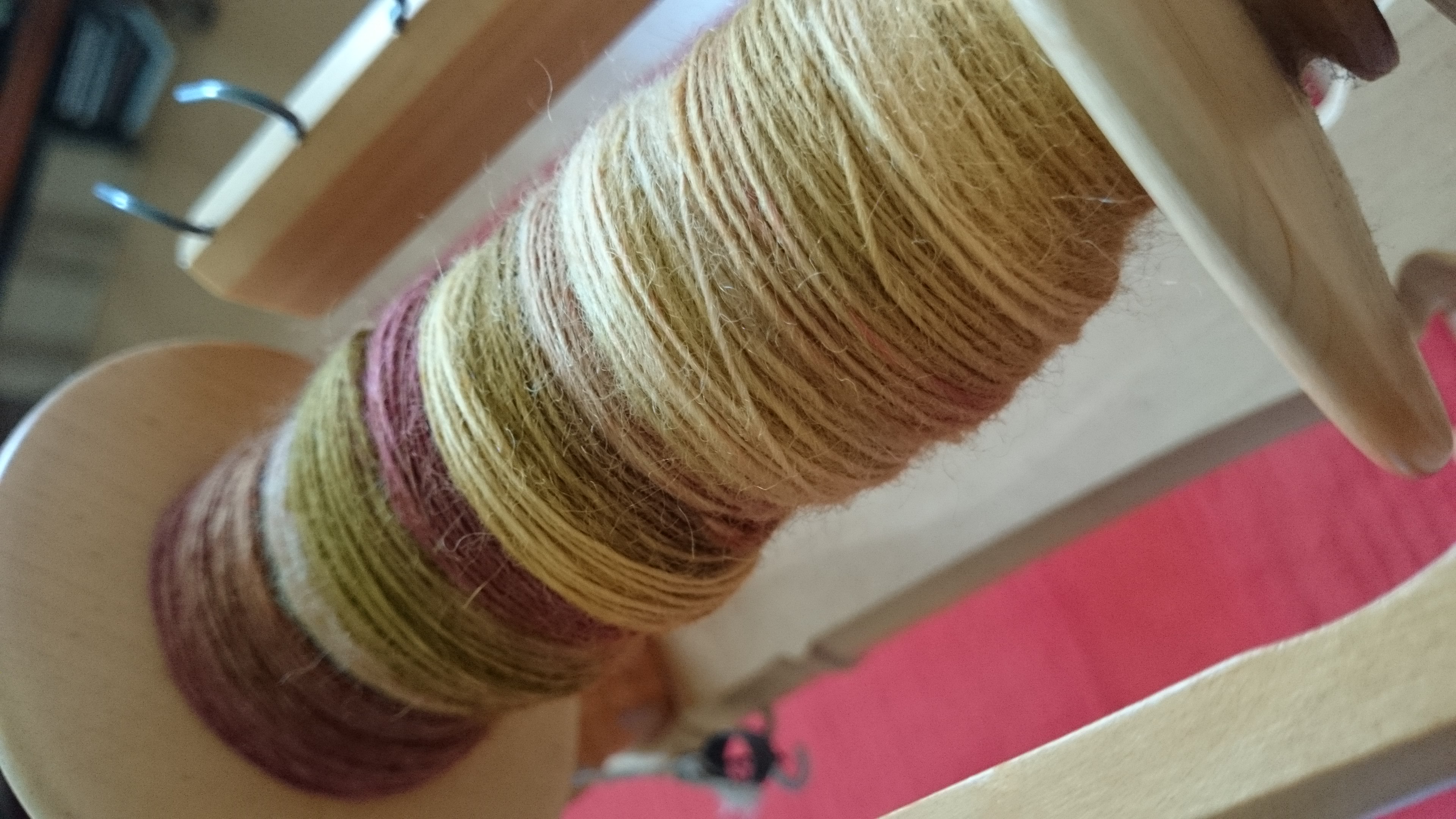 I’ll leave you with a picture of last weekend’s walk and a promise to be back! 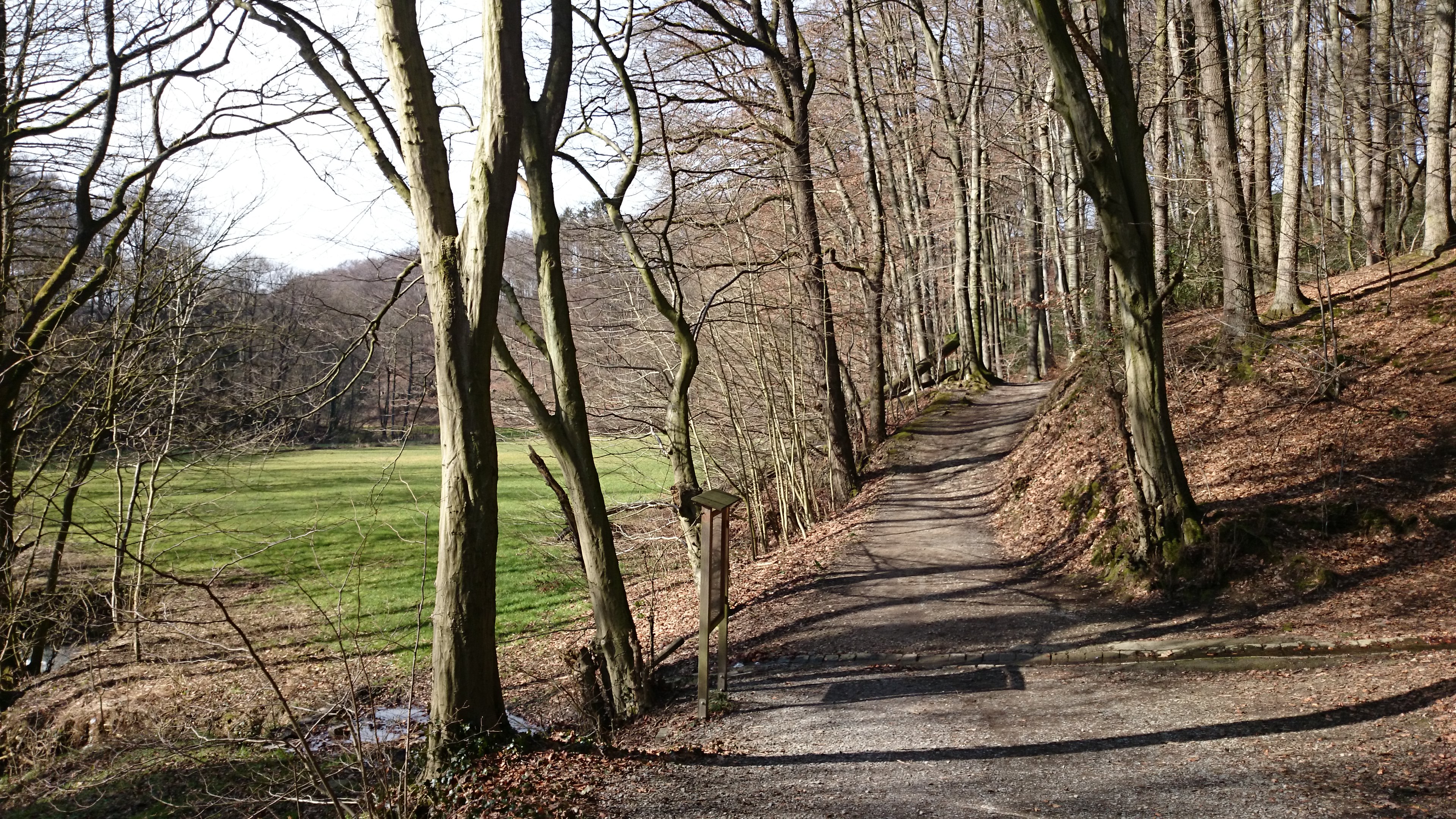 I’ve been at my parent’s since last Thursday and the unbearably hot weather my parents complained about in the last weeks has seemingly morphed into an early autumn. It’s rainy and quite windy so my outdoor expeditions have to be carefully timed. I managed a nice walk across the fields near our house yesterday – the openness and flatness is always a welcome change after months being cooped up in the city. 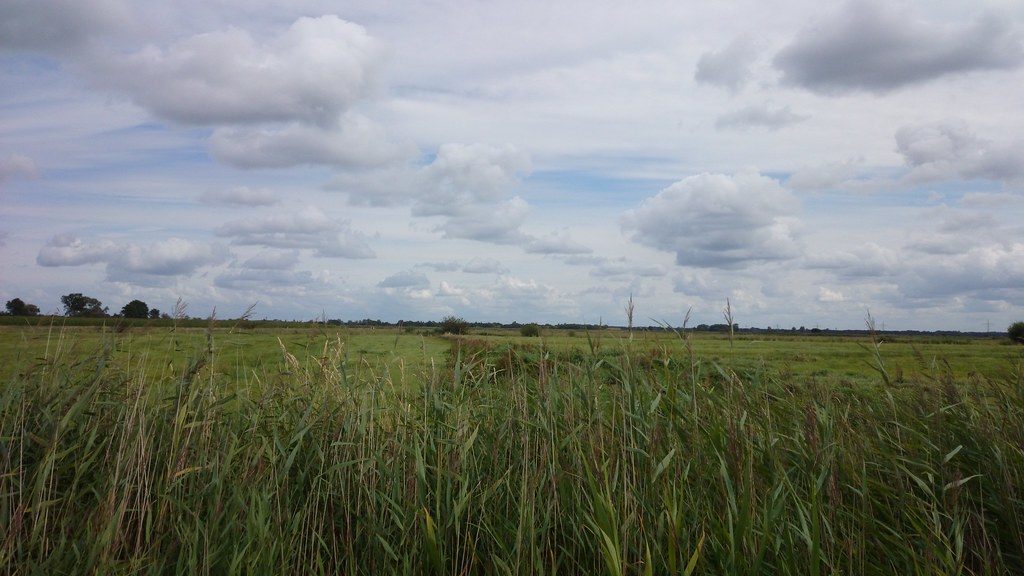 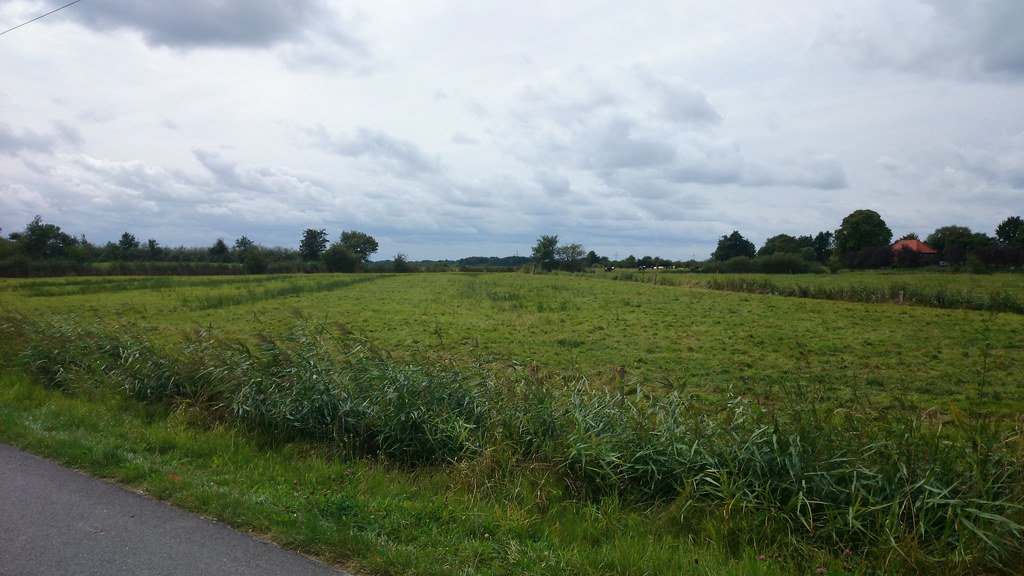 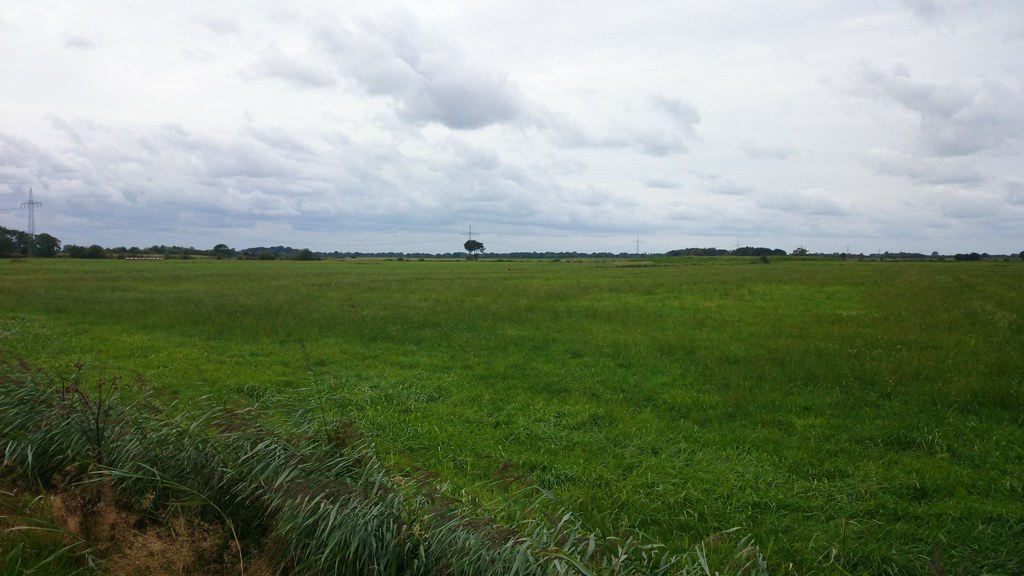 I also made good progress in my Turnstile, still in the first stripe section but it’s growing fast. 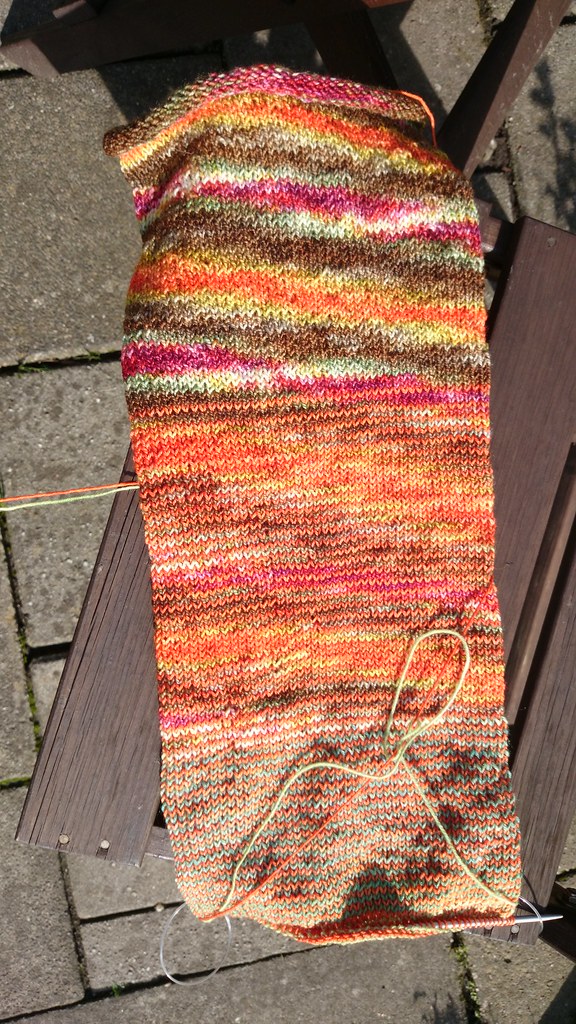 In preparation for my trip to Brittany next week I’m also working on my meagre French skills. 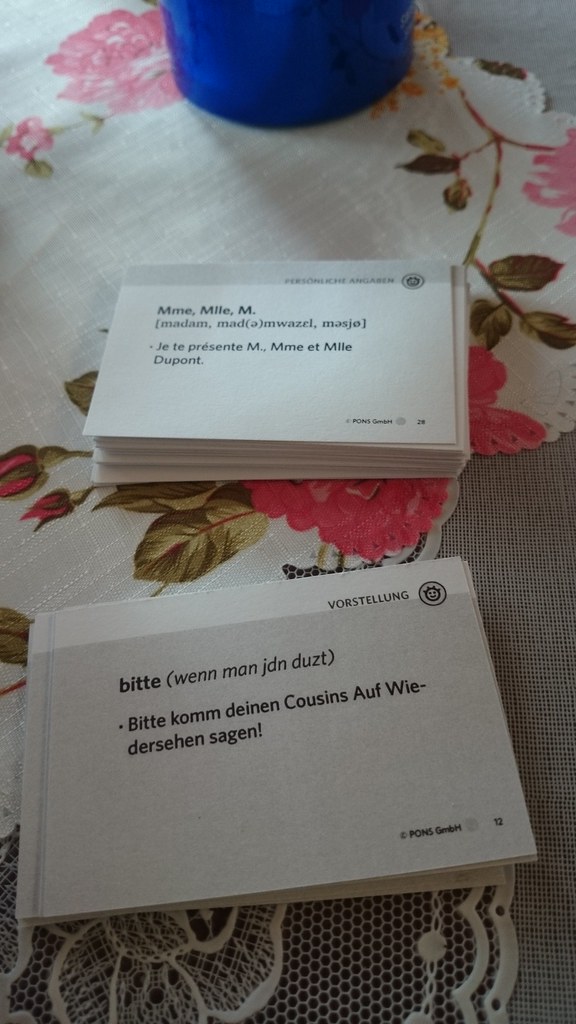 Looks like the rain has stopped for now, so I’m off out! See U!

So far I’ve knitted the first solid section am halfway through the first stripe section (I’m a bit behind with the pictures). 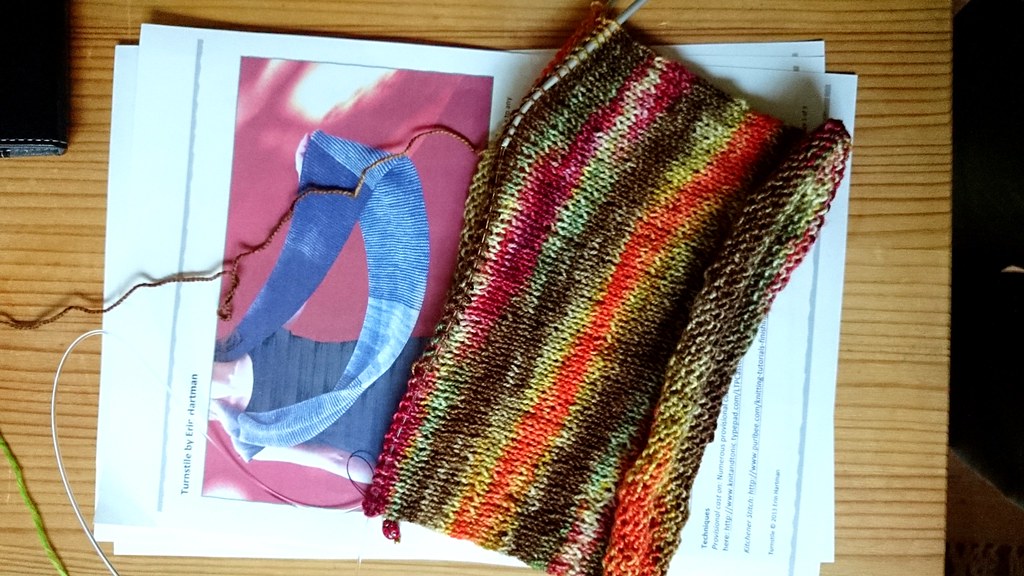 I’m already in vacation-mode and gave my new trekking boots a trial run this morning – a lovely walk and the boots did just fine! 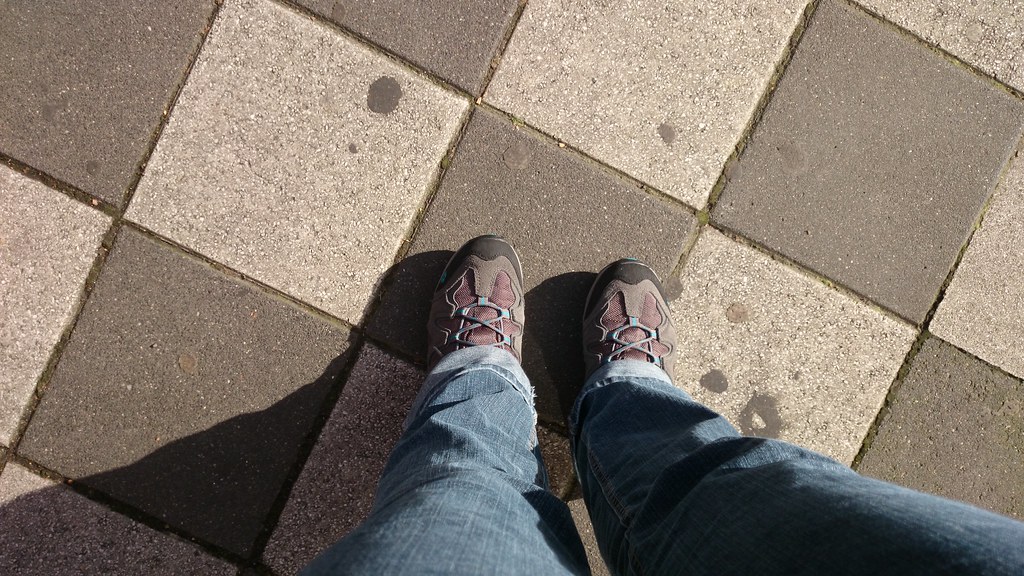 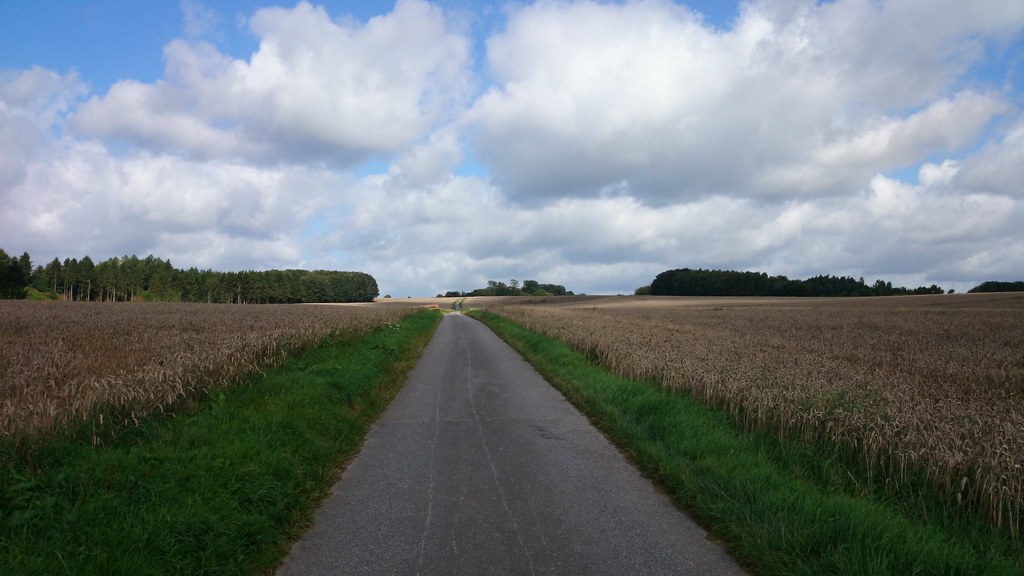 Unfortunately there are still some blocked paths because of the huge storm we had in June and everywhere are big piles of cut trees. 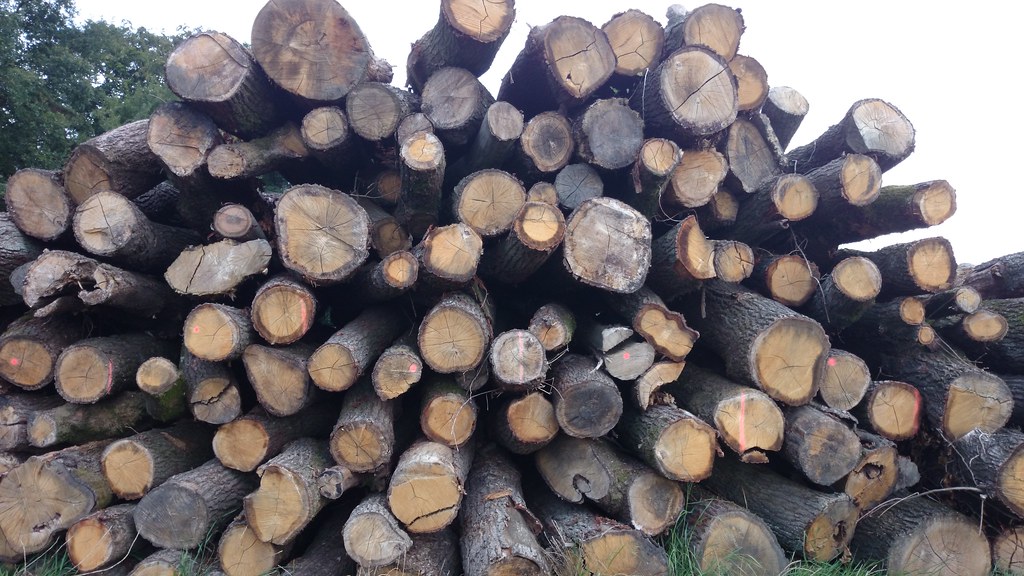 The walk has a nice mixture of woods and open views of the surrounding valleys and hills and I even found a promising spot for bramble-picking – next year, though, because I won’t be here for the next three weeks. 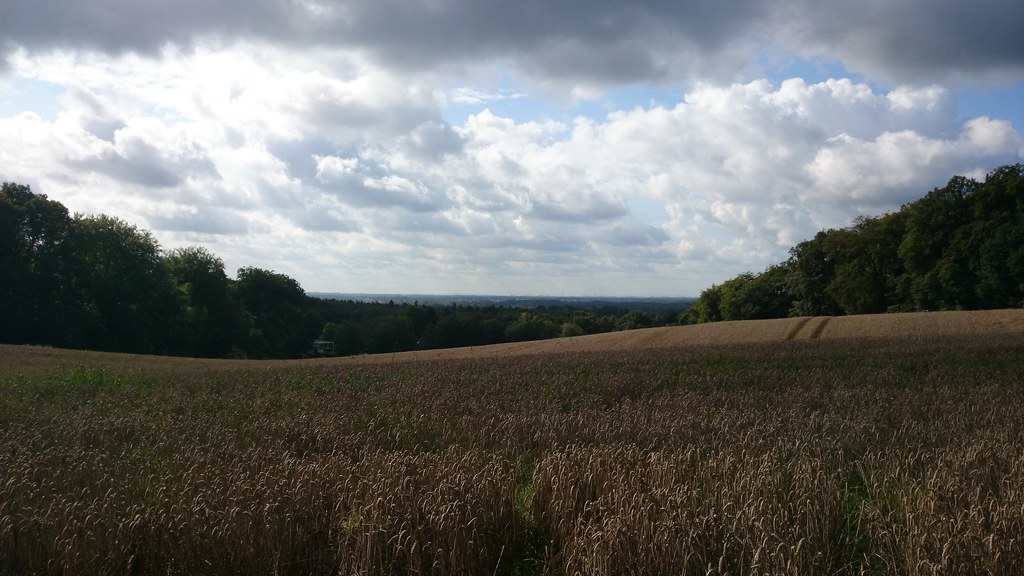 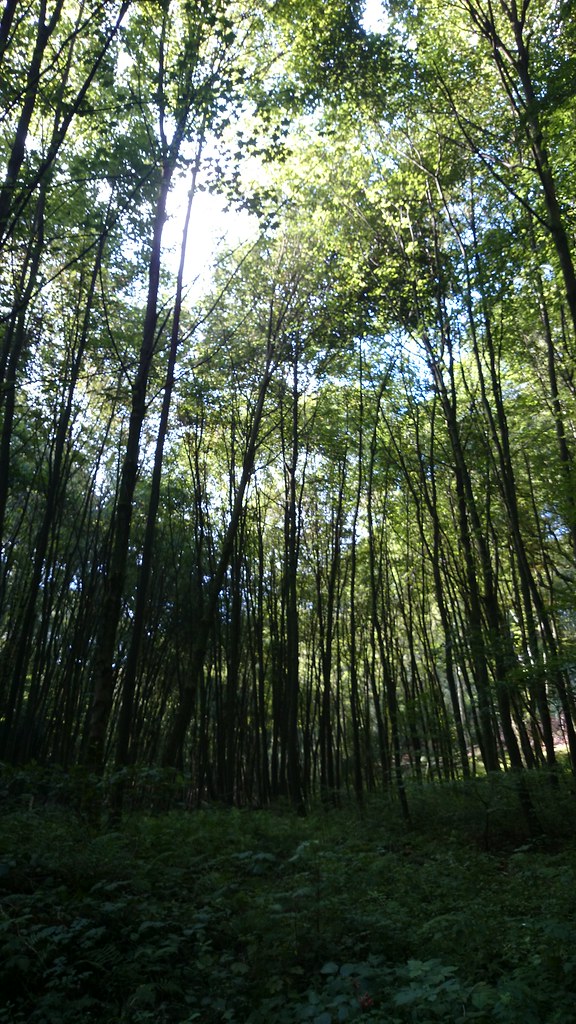 I’m cautiously hopeful I’ll post more regularly again now I’m actually doing something besides sitting at my desk all day! Then again, I’ve lost count how often I’ve written that on here, but I’m reluctant to abandon this space fully. Anyway, hope you’re enjoying your summer, wherever you are!

So, to keep with the good intentions for this blog, I finally uploaded the pictures from my camera! It seems like I last did this in June 2013 which means there are lots of things I have yet to blog about (more backlog – fibre, yarn, books, pictures and stories – getting there!). Since I very much want to go forward now I’m starting with the first trip I made after handing in my dissertation in December. Before spending Christmas with my parents I went to Friesland (NL) for a few days with my best friend. We had a lovely time walking at the sea, shopping in Groningen and overall just relaxing. Grab yourself a cuppa and relax with the pictures as well, if you like (or go view the slide show on Flickr)

Next post will be a batch of yarn and fibre related pics, promise! See U!

It’s been a while since I even thought about my blog but as I’m slowly relaunching my life I hope to use this space once more. I handed in my dissertation about two months ago and I’m defending it in two weeks. After almost a year of constant work I find myself in a bit of a struggle to getting things done, even things I dreamt of having time for last year, like knitting, reading, spinning, taking walks outside and so on. So, I’m trying to use and enjoy my free time and hopefully, write about them here. Now I only need to remember to take my camera with me and upload the pictures…

So, I’m looking forward to some of these things this year:

So, if you’re still reading my blog after almost a year of absence, thanks! I’m off for a bite to eat and some knitting now. Pictures to follow!

This week has been a struggle of trying to keep reasonably cool – hard work if you live in a top-floor flat and your new office building at work is made of metal and has no air-conditioning – and carry on with writing. It was not a pretty sight, I’m afraid…

Still, I managed to make a reasonable amount of progress and by now we are back under the twenty degree mark (Celsius, of course) after nearly 37 °C on Wednesday.

Despite the heat I spun a bit more of the Texel and started plying the first half:

Wednesday evening I went to see the Watermill Propeller Company play Shakespeare’s The Taming of the Shrew at this year’s Shakespeare Festival. Thankfully, we had seats on the ground floor, as this replica of the Globe Theatre is mostly made of metal:

If you ever have the chance to see Propeller, do it! They are really good and very intense!

And today I had a lovely afternoon with my best friend visiting an exhibition.

I had a tasty piece of cake…

… at the beautiful museum café…

Next week I hope to finish chapter one of my dissertation and hopefully have some fun at the weekend.  Also, I need to decide which fibre to spin for the upcoming Tour de Fleece! See U next Sunday!

Trying to make a big piece of fabric I bought on sale ages ago more wearable with blue dye... Hopefully it will come out subtle enough to make a top out of it!
Homemade pizza monday! I'm trying out kale as a topping...🤔
Farmer's market haul - can't wait for the first spring greens! Until then I'll eat my favourite apples. Also, I survived my first week in the new job!
Cryptic knitting notes...
Happy Holidays!
Sunrise on my 41st birthday...

Wool on the Web

Find me on Ravelry